On 5 December, MCRN held its 2016 Annual General Meeting and celebrated its 30th birthday.

Aunty Carol Cooper, being an elder of both the Darug and Gundungarra peoples provided a Welcome to Country and congratulated MCRN on its 30th anniversary.

We also enjoyed presentations from Susan Templeman, Federal MP for Macquarie, Trish Doyle, NSW State MP for the Blue Mountains, and Blue Mountains Councillor Romola Hollywood, who introduced Councillor Shae Foenander as the new Blue Mountains City Council ex officio delegate to the MCRN Board. Shae briefly spoke to emphasise the need for advocacy and encouraged people to contact her on community needs and issues. 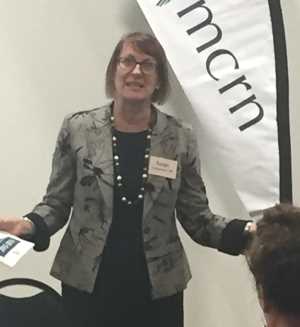 Susan Templeman spoke of the projects she has been able to participate in during the past year and expressed her support for the adoption within Blue Mountains community service sector of the Harwood approach, noting how much good community development practice is continued through this work.

Trish Doyle acknowledged the crucial value of networking, including how in her own life, at a time of need, she found MCRN as critical in accessing support.

MCRN Manager, Kris Newton, provided a summary of MCRN highlights of the year including work in resilience and preparedness field, implementation of the Harwood process, ongoing networking to provide valuable sector development and providing advocacy for community services in the Mountains.

A special treat for those attending the meeting was a video presentation from previous MCRN Coordinator, Mary Waterford, in East Timor. Mary outlined some highlights of the MCRN over the past 30 years including Aboriginal service support and projects, projects with People with a Disability, raising awareness for Mental Illness, and especially for the East Timor project in raising so much funding (over $1mill to date) and supporting so many East Timor projects.

Following the AGM, guests were invited to join MCRN staff for celebratory refreshments.

Networking the Mountains, The Mountains Community Resource Network's History of Working for Social Justice, was published in November 2006 to celebrate our 20th birthday.  You can download it here: